IN THE NEWS: Is “Checkout Charity” Just a Money Grab? 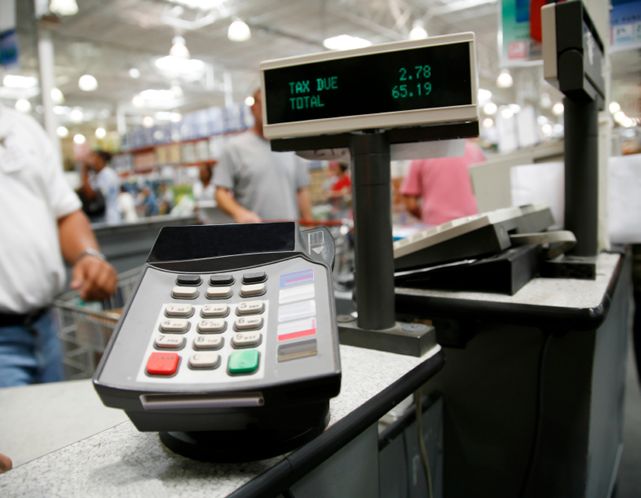 Forgive the fact that this post doesn’t have much to do with Parenting and Kids as per usual, but I really need to get this off my chest. Thanks.

As I unwittingly approach the cash register, items in hand, little do I know what’s about to occur. You see, what I thought was an innocent trip to the store to purchase milk/wine/clothes/[insert item here] has become a battle of wills and a test of my ability to overcome what we all secretly fear: Public shame.

Yes – what I thought was a mundane daily errand has become a thing. You know – something that will evoke a strong emotion, and a subject that you will recount sheepishly to your family and friends, after the fact.

We all know the score.

As consumers, we’re increasingly being tested and potentially shamed at the checkout counter.

This relatively new corporate method of money collecting is what I think is an insidious and downright unfair method of achieving a company goal.

Yes – charities need money, but do they need to shame unsuspecting consumers in the process?

There’s little warning when and where this sneaky yet popular type of occurrence will happen. You may think that you’re getting a carton of milk and some bread at the supermarket, yet said supermarket thinks otherwise.

You’re a target and a potential donator of funds to what is oftentimes a very unclear, murky “charity” that you’ve been asked to support.

The common thread regarding these types of incidences is that little if no information is given by the requestor (in most cases, a cashier), yet the requestee (you or I) is expected to hand over some money.

How is this right or fair?

I don’t think that it is.

Here is what I think.

Using a “gotcha” technique that is based on surprise, intimidation and, let’s face it, humiliation, is not one that sits well with me. And I don’t think that I’m the only one who feels this way.

Pressuring consumers to give money to charities about which they’ve been provided NO information is just wrong.

Are the companies getting a tax break on my after tax dollars that I may be donating? I don’t know.

This information is never given, yet I’m supposed to give them money.

I don’t think so.

Until both the charity and the business that is requesting money on behalf of said charity is completely transparent about how this money is being spent, I’m not about to hand over funds. Further, using the embarrassment factor, that is, hoping I’ll say “yes” just so that I don’t seem like a cheapskate in front of the people who are standing in line behind me, is sneaky, underhanded and downright wrong.

Do I want to donate $2 to ABC Charity? Perhaps. But I’ll do the research and determine how, when if and how much I will provide to said charity on my own time.

This was the crux of a “rant” that I did for CBC The 180 about an increasingly popular  tactic of consumers being asked to donate to charity while paying for items at the checkout line. Here’s a link to the rant:

Having written about this topic before and discussing my extreme distaste for it, CBC wanted to know if I still felt this way and, more importantly, if my opinion on the topic was representative of so many others who are unsuspectingly “hijacked at the checkout.”

The short answer to both questions is “yes.”

“Checkout charity” has become even more prevalent than it was even a few years ago, and my disdain for the tactic is, apparently, not unusual. I’ve written extensively about having to deal with a “Meltdown in Aisle 5” - the challenges of shopping with young kids in tow; imagine now trying to add yet another variable to the mix? Screaming kid(s), a shopping cart full of items and an opportunity for yet further humiliation by being asked for money for charity and having to either

a) say yes, just to save face and salvage what little dignity you have left, or

b) say “no” and prove to all those in line behind you that yes, indeed - you are a horrible person (screaming child notwithstanding).

As part of a segment on the subject including my rant (above) a poll done by the CBC 180 on this very topic revealed that over 82 percent of those polled agreed that this type of charity collection felt like “an ambush for alms.” In other words, most people don’t like it. To be more specific, people seem to particularly despise being “ambushed” when all they really wanted was to buy an item or two and head out on their way.

It doesn’t seem to matter what type of items are being purchased, either. They could range from milk and eggs to wine, spirits, hardware or clothing. Anything and everything is a seeming opportunity for a checkout request for donations, much to the chagrin and often, the embarrassment, of those being asked.

To say “no” could render one earmarked as a “cheapskate,” a “Scrooge” or perhaps just an unfeeling, insensitive sod in front of the checkout line of people who are in full earshot of the request. For those who are more prone to public embarrassment and who dread the prospect of being publicly shamed, it may seem to be the lesser of two evils to begrudgingly submit the few bucks just to save face. Say “yes” and you’re absolved of any perception of cheapness. Say “no” and you’re a mean-spirited, cheap and unkind person who doesn’t care about others. It doesn’t seem fair, does it?

I welcomed the opportunity to once again state my opinion and to speak for all those (of whom there are many) who agree that being ambushed for money when all you were looking for was a carton of milk (or otherwise) is just plain uncool.

Following the CBC “rant,” they did a follow up show where my (and many others’) dislike for this particular tactic was counter-balanced by feedback from charities and those who support this type of thing. You can read the full show notes here, as well as listen to the segment that is linked on the page (click on the “Listen” button under the image):

The Case For and Against Checkout Charity - CBC The 180

Check out the Twitter commentary and comments included in the post. Seems like I’m not the only one who is irritated by this method of money collection. Here are some examples:

The whole thing seemed to hit a collective nerve. Who knew? Apparently so many more of us are completely unimpressed by this new method of money collection. Ellen Roseman, resident Consumer Advocate for the Toronto Star called, following the CBC interviews, and wanted to discuss this topic as well. I did the interview, which can be read here:
Checkout Charity Campaigns Can Backfire
Some items related to “checkout charity” that are questionable:

As you can see, there are so many questions surrounding this topic, yet so little answers. The topic is a hot one; apparently there are still more of us who are irritated by this increasingly popular practice.

Reuters came calling as a result of the radio and newspaper articles and I stood firm on my position. This practice is apparently ramping up around the holiday season, all across North America (Canada and the U.S. are equally affected). Here’s the full article/interview:

Checkout Charity: Get Ready For the Cash Register Ambush

So, it’s a thing now. Whether we like it or not, it appears that “checkout charity” is here to stay. Yet so many of us are increasingly uncomfortable with this method of collecting money, and still it continues. The question is, “why?” And what can we, as consumers, do to stop this type of underhanded tactic?

Any suggestions? I welcome your commentary and feedback. Please leave me your thoughts in the comments section below.

Happy New Year: This Blog’s Top 10 Posts of ...
views 94
Pregnancy and Public Transit
views 862
Faking It: When Your Kid Pretends to be Sick
views 1321
charitycontroversyembarrassmentguiltstress

Buy my book on Amazon!

Subscribe to the Multiple Mayhem Mamma newsletter and never miss another post! From top tips to insight to good old-fashioned advice, it's all included once you sign up. You'll also receive other related Parenting updates from me from time to time. Don't worry - it's never spam! Enter your email below and start receiving parenting-related updates immediately!

Want more parenting advice and insight? Subscribe to my newsletter today and never miss another post about the craziness of raising kids!