Are Parents to Blame For Picky Eaters? 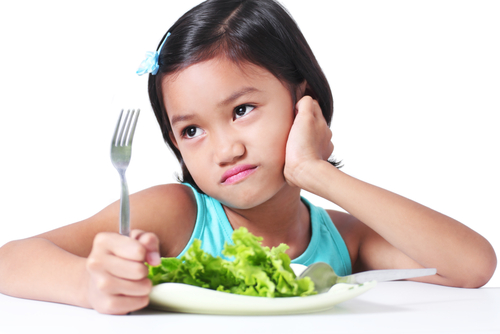 Weâ€™ve all dealt with the picky eating habits of our kids at one time or another. Whether itâ€™s a disdain for broccoli or a dislike of asparagus, most parents have had to negotiate with their children about certain types of food that said child has deemed “gross.” Iâ€™ve done it myself and have used every trick in the book to get my kids to eat what I think to be a balanced and sufficient meal.

But what about those kids who consistently decline most food items put in front of them, demanding, instead another meal selection, snack or pronouncing a downright refusal to eat at all? What about them? Where did they get their chutzpah?

At the risk of being scolded, may I suggest that it may very well be from their parents?

Itâ€™s safe to say that many kids are picky eaters because their parents have coddled them. Through fear that they will eat nothing and - gasp - go to bed hungry, they have been provided with their own personal chef and concierge, taking orders and serving meals on demand.

In many households, it is the child (or children) who have been allowed to dictate what is being served. In these homes, the parent(s) gives in to the childâ€™s demands and makes special or separate meals for them. How many of us have given in and said, “okay, if you donâ€™t want to eat this, Iâ€™ll make you something else?”

Guilty as charged. And itâ€™s not a stretch to assume that you are too.

As parents (and mothers in particular - there, I said it), we worry about our childrenâ€™s every need. Whether itâ€™s the fact that they have a runny nose, a fever or the fear that they havenâ€™t had enough to eat (in our opinion), so many of us feel the need to rectify the situation at any cost. Itâ€™s this parental instinct that takes over and shifts the balance of power from the parent to the child.

In the case of picky eating, the tendency for the parent to give in to the childâ€™s refusal to eat sets up an expectation that all demands and requests will be accommodated.

In these scenarios, theÂ child feels that they are in control and they donâ€™t have to try anything. Also, it sets them up for unrealistic expectations as adults that they will be given in to whatever they ask for.

Allowing kids to set the stage for meals is just one example of the growing trend towards a child-centred philosophy of parenting. The rise of “helicopter parenting”and an age where over-protection is the norm, not the exception, just feeds (pun intended) kids desire to have all of their demands fulfilled.

Unfortunately, giving in to these demands just sets up kids for unrealistic expectations in the future. As difficult as it may be, itâ€™s in our kidsâ€™ best interests to not always give in to their demands, particularly regarding food choices. In the absence of a specific allergy or inability to digest certain foods, whatâ€™s on the table for dinner should be just that - dinner, with no option for choice. At the risk of sounding like an old fogey, when I was a kid, there was no choice - each meal was what we were eating and that was it. No consulting with us kids about whether or not they wanted to eat it, what they wanted instead, or why they didnâ€™t like it. Not eating meant that theyâ€™d likely have a grumbling tummy and a voracious appetite the following morning.

Itâ€™s a hard thing to do, denying your child their preference for food, as thereâ€™s always the fear that theyâ€™ll starve. They wonâ€™t. Especially if thereâ€™s a fridge full of food and a healthy balanced meal in front of them that they have chosen not to eat. As difficult as it may be, as parents, we are obliged to teach our kids that there are not always choices in life. As they grow up and later when they become adults, they will need to know that sometimes, the luxury of choice is absent. More importantly, itâ€™s crucial that children learn early to be flexible, accommodating and that sometimes they will have to just go with the flow and deal with the situation at hand instead of assuming that there will be an option. There wonâ€™t always be one.

Is your child a picky eater? How do you respond when your child wonâ€™t eat their meal? Do you give in or say “no?” Tell me about it in the comments section below.