Fear of the Unknown - Helicopter Parenting and Latchkey Kids 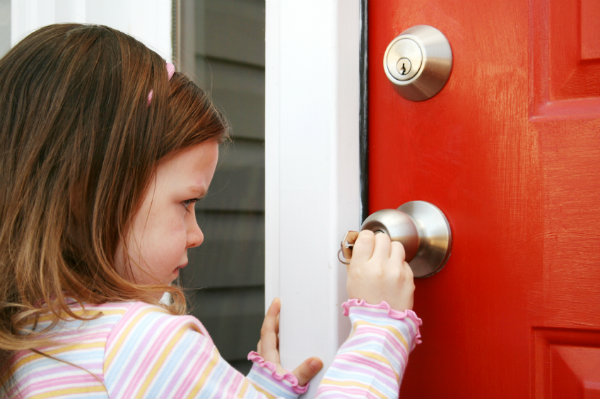 Are there still latchkey kids these days or have they gone undercover in the age of helicopter parenting and our increased paranoia about kids’ safety?

I used to be a latchkey kid.

As a matter of fact, I remember walking to and from school alone, sometimes with friends of the same age, as young as eight years old. I also remember spending many days and evenings on my own over the summers, after school, going to the park, the corner store for candy, riding my bike. All my friends did it too. My parents were working, making a living. I was fine.

While this occurred in the not too distant past, it wasn’t that long ago where kids other than myself and my friends were afforded the responsibility and provided the trust to similarly live their lives. In doing so, they were able to gain confidence in their abilities. This often included walking to and from home to school and back, to the corner store, or somewhere within the vicinity close (or close enough) to home.

Now, it’s considered nothing short of child abuse to allow a kid under the age of 12 or 13 to walk anywhere on their own. Don’t believe me? Just think of Lenore Skenazy who was publicly vilified for allowing her nine-year-old son to take the train alone, or Danielle Meitiv, whose children Rafi and Dvora aged 10 and six respectively, were taken into protective custody by the authorities after being spotted walking a few blocks home from the local park.

Sadly, this event is all too common when it comes to society’s perception of what we should or shouldn’t be allowing our children to do. Despite a long history of children having considerable responsibilities at much younger ages than they do now, we have, strangely, become more worried about our kids’ abilities to fend for themselves in today’s world.

There was a time where kids were allowed to be kids, which meant going out to play and coming home when dinner was on the table. The delta between this edict and the return time could be as much as three or four hours. Oh, the freedom!

“There was a time where kids were allowed to be kids, which meant going out to play and coming home when dinner was on the table.”

Today, the thought of a child walking home alone, letting themselves into their house and staying put until mom or dad gets home puts some parents into a state of hyperventilation. I’m guilty of hyper-parenting as well but also realize that I’m not doing my children any favours by passing my paranoia on to them.

As with many parents, I’ve bought into the paranoia about the dangers of life to some degree. Touted on the evening news, online and via social media, one would think that the world is coming to an end, at least in terms of kids’ abilities to be…well…kids. These days, parents face a daily struggle to provide their children with the right balance of protection while still affording them the freedom that they require to become confident, secure adults. It’s a difficult balancing act for sure, and one that’s not easily managed.

Yet, what has changed in our society, really? Has human nature - both good and bad - really gotten worse in the past 30-40 years?  Not much. In fact, there are still the same threats that we had so many years ago, if not more. “The Boogeyman” lived then as he does now; we’re just more aware of him, thanks to Professor Google.

We’ve become a society of incredibly fearful parents, much to the detriment of our kids

We’ve become a society of incredibly fearful parents, much to the detriment of our kids. As a result, our children are the ones who are suffering, both from lack of experience and from general distrust. The thought of exerting any semblance of independence is quickly followed by waves of anxiety, distress and “stranger danger.”

And so, those who allow their kids any degree of freedom or responsibility are made to feel like they have somehow failed in their roles as parents. How can this be a good thing?

The very things that we hope to see develop within our children are being stifled by our (often) unsubstantiated fears of the unknown. Independence, self-assuredness, fearlessness - these qualities are left to wither and sometimes die due to our hesitance to loosen the apron strings and let our kids experience real life. While we are stalwartly determined to not let our our most precious assets venture too far beyond our purview, we are, at the same time, stifling the very real qualities that we’d hope to see in our children as they move towards adulthood.

This fact alone should give us pause to revisit what we are teaching our kids about the world in which they live. After all - our job as parents is to give them the skills to survive in the real world, to arm them with knowledge and, perhaps most importantly - provide them with confidence. All of these must-have attributes will never be realized if we continue to coddle them and refuse to let them venture beyond our line of sight.

There are still “latchkey kids” out there, walking themselves home from school and letting themselves into the house to wait for their parent or parents to come home. It’s safe to say that these children are likely less afraid, more self-assured and likely more responsible than their coddled counterparts. They’re also, sadly, more likely to be the brunt of our collective pity and their parents the recipients of our collective scorn, as indicated by the reaction to Ms. Skenazy and Ms. Meitiv indicates.

In today’s world, Helicopter Parenting is the the norm, not the exception. In spite of this fact, Latchkey Kids still exist; they’ve just gone undercover, having been forced to operate in the shadows as a result of our over-protective and fearful society. They’re in hiding with no clear indication of when they can come out of the shadows to lead the way for their peers who would likely gain so much more from the shared knowledge than they would lose. Yes, learning to be independent and following the lead of those who bravely do so, often because there’s no other choice, would be inspiring, to say the least.

For these parents who either have no choice or have the choice but have chosen to teach their kids the ropes; for those who send their children out with a key in their backpack and who say a little prayer as they leave their children to make their way in the world, I salute you. For you know  and act upon what all of us “Nervous Nellies” secretly know but chose to ignore: that giving our kids the freedom and responsibility to trust their own judgement and abilities is one of the greatest things we can do to help them grow into highly-confident, well-functioning adults.

Perhaps it’s time that we collectively reconsider the effects of our parental protectiveness and look to another alternative that will ultimately help, rather than hurt our children in the long run.

Listen/Subscribe to the Parenting Then and Now Podcast

Subscribe to the Parenting Then & Now Podcast on Android!